We are JavaScript lovers with a zeal to engross ourselves in full-stack technologies and pass the same to our customers in the form of well-crafted posts, news and updates.
Home > Node.js > Node.js – Is it Perfect for Web App Development? Learn Everything

Node.js – Is it Perfect for Web App Development? Learn Everything 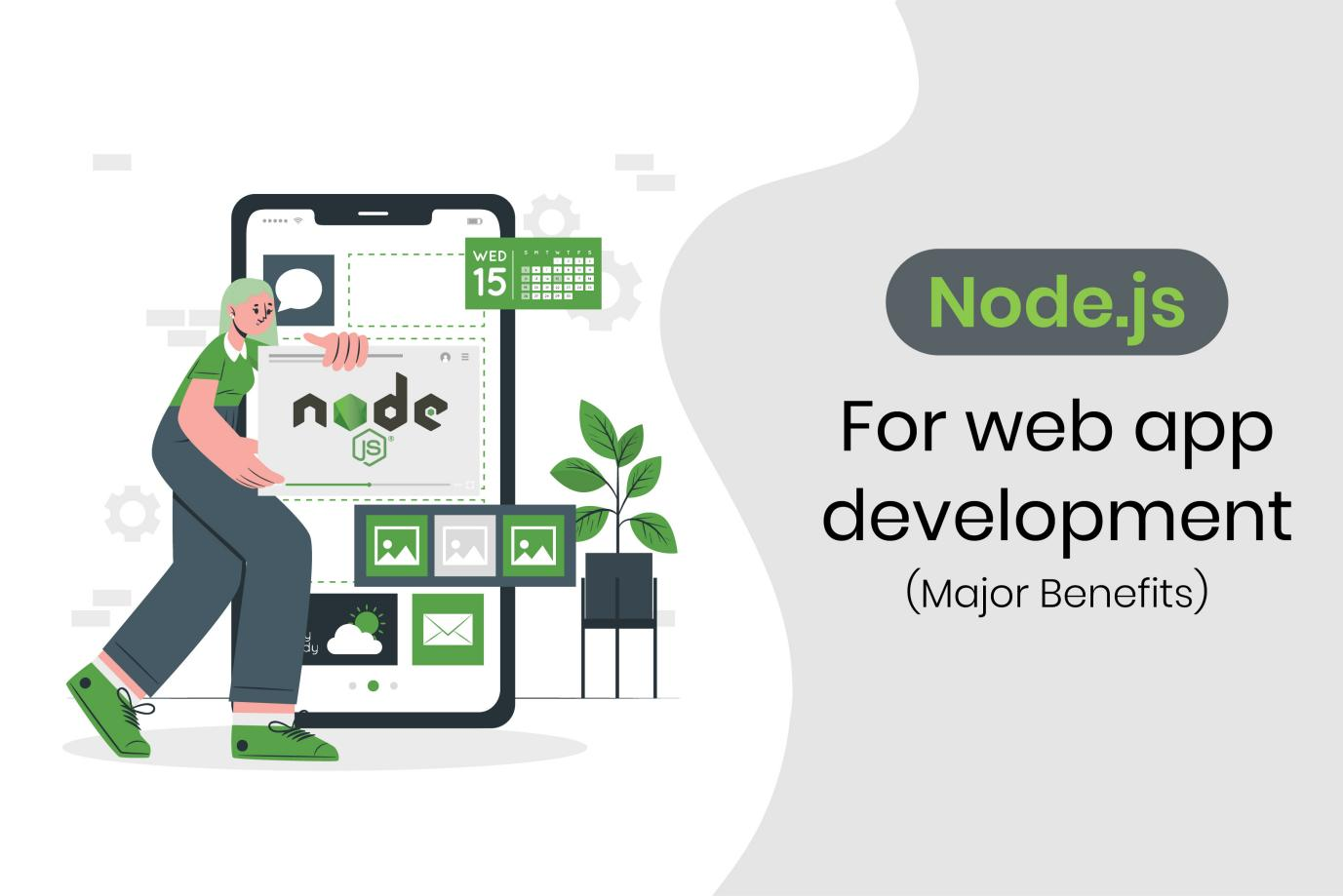 Web apps development is no longer what it used to be. Time has changed, and so is the approach. A good web app requires strong backing from progressive, powerful technologies designed for that particular operation, just like JavaScript – The inseparable part of the web apps development process.

We all know that JavaScript tops the most used front end and back-end technologies. But what people don’t know is that JavaScript is also a crown holder of client-side programming languages. It has revolutionized web apps and the cross-platform app development sphere.

Node.js, React.js, and Angular.js all fall under the same roof as the most successful JS technologies, but as an experienced Node js development company, we’ve observed Node.js holding the prime positioning in server-side programming and plays a crucial role in developing web apps.

Owning massive respect due to its feature-packed status, Node.js is used by more than 49.9% of JavaScript programmers – Reported by Statista.

Sounds interesting? Let’s have a profound understanding of Node.js and how is it perfect for website and application development.

Emerged in 2009 and quoted as the ‘most exciting single piece of technology in the JavaScript universe’, Node.js is neither a framework nor a library but an open-source, cross-platform runtime environment for JavaScript to build server-side and client-side web apps.

How node.js is best to create fast and scalable web applications

Let’s have a closer look at Node.js advantages for web application creation: –

Node’s architecture is designed and built on Google’s high-performance V8 engine. Though the engine was initially conceptualized for Chrome, the Node.js team leveraged it for their environment’s purposes. This engine transforms specialized JavaScript into general code based on C++.

V8 engine analysis the JavaScript that’s only understood by browsers and translates it into a language that’s easily processable by machines and servers. What makes the V8 one of the best engines in the industry is its constant updates. Team Google actively works on it to keep its performance intact and speed improved with every new version released.

Scalability is crucial, and Node.js was built to meet this scenario. Node.js has a cluster module that balances every running CPU core load. It can process multiple nodes simultaneously while keeping a serene communication flow. It further increases personalization and decreases workload through its horizontal partitioning feature, where an app can be split into several instances to present its variety of versions to users based on their age, interests, language, location, etc. Most important, Node’s non-blocking input/output model uses an event loop request-processing system for high speed, letting apps process thousands of requests without a jitter. When scalability is the concern, no web backend development solution can surpass Node.js.

One of the most evident reasons that make Node.js suitable for web apps development is its coherence with JavaScript. Being from the same programming family, Node’s syntax, structural principles, and functionality are similar to general JavaScript. If you have a team of JavaScript engineers, it will be easier for them to learn JS-based Node, an entirely new language. Moreover, the front end and back end codebase will be similar, easy to grasp, and maintain because everything is JS-based.

A backend development language or run time environment must be able to process requests seamlessly. Node.js is efficient in data processing through its data handling tool. Here’s how:-

Node.js facilitates load balancing over multiple CPU cores. It simplifies tasks with a module called caching. Every time your first module is asked, you are logged in. So users can browse quickly without waiting too long. eBay benefited quickly from NodeJS by including it on their IT stack, as they wanted it to be as effective as possible with live communication. Node.js minimizes the load speed by leveraging built-in API for developing HTTP and DNS servers and JSON, a data format, for smooth data exchange between client and web server.

Microservices development in a fast environment

There is another reason why Node.js became so popular so quickly. It is ideal for developing microservices (splitting monolithic functionality into dozens or hundreds of smaller services).

Microservices must communicate quickly, and Node.js is one of the fastest tools on the market. Node.js’ non-blocking algorithms are one of its main advantages for software development.

Multiple requests can be processed by Node.js simultaneously without waiting for the first one to finish. The messages can be sent to dozens of microservices, and the messages will be received and answered simultaneously.

When you download the Node runtime environment, you get access to NPM (Node Package Manager). Some people in communities also call it a node.js package marketplace where you can find ready-to-use code libraries and additional functionality. Official statistics show that more than 100,000 new packages are added weekly. There are hundreds of Node.js modules, frameworks, and packages shared by top developers for free.

The Node.js community is incredibly active on GitHub, StackOverflow, and Reddit. Developers are even allowed to create dedicated group chats on Slack and Gitter that everyone can join. The community reviews each other’s code, shares reusable fragments, suggests frameworks, and answers all Node-related questions. Node’s community is a great place for growth, learning, and innovation.

Joyent, the company that supported Node.js in its initial days, developed the Node.js Foundation, which has become a part of the JS Foundation. All companies are welcome to join and help the tool evolve. Presently, foundation members include Microsoft, PayPal, Trello, Medium, IBM, and others.

It is also one of the distinguishing factors of Node.js application development that it is not just limited to community resources but has a reach to the world’s leading corporate resources.

As per a Node.js web survey report, Node.js is considered the best to increase a JS developer ‘s productivity through its 68% faster code execution, slacking off development costs, and enhancing app performance to a great extent. It is a result of the successful usage of Node.js frameworks.

Looking at the trends, these are the most used and best Node.js frameworks presently in the industry:

As stated above, Node.js is one common thing among the world’s most popular brands’ mobile apps. Let’s understand how these brands utilized the features of Node.js to beat their challenges: –

Uber is the first of three companies that utilized Node.js in the complete production stage. It leveraged Node for high-speed and scalable application development in its cross-platform tech solution to manage a massive number of user requests. Node.js helped Uber match multiple riders to their drivers in seconds.

LinkedIn needed a powerful technology to support their enormous 59% of traffic logging in from their mobile app. Node.js helped LinkedIn reduce servers from 30 to 3, lower memory head, draw their focus from troubleshooting to app development and boost the holistic performance by 20 times in several cases.

If you are looking for a professional IT solution partner or are still unclear about why to utilize Node.js in your project, we would like to introduce you to JS Panther. A team of experienced Java-Script developers, QA analysts, testing engineers, DevOps specialists, Digital Marketers, and tech business consultants, delivering successful websites, mobile apps, and enterprise-grade business solutions for over 4 continuous years.

Node.js development is one of JS Panther’s main specialities. Our dedicated Node.js developers have utilized JS, Node, and its multi-utility frameworks in numerous advanced projects from eCommerce, e-learning, healthcare, food technology, fintech, and other booming sectors. We’ve discovered from our years of working experience that Node.js is a powerful backend tool capable of handling terabytes of data and sustaining millions of daily visits.

How exactly is Node.js utilized in web application development?

Can Node.js be used in both the front end and back end of web apps?

Node.js is a lightweight and efficient application run-time environment that opens new application development methods. Yes, it can be used to develop the frontend and backend of web applications.

Is Node.js suitable for enterprise applications?

Node.js is an ideal solution to develop scalable web applications with excellent performance js code. Though much like any other technology, it also has some positive and negative aspects, you should still consider it for your next web development project.

If you are feeling unsure about the backend technology for your next project and still have questions regarding Node.js development, JS Panther is at your service. Our experienced team of Node.js experts knows how to shortlist the most refined JS modules and frameworks for a worthwhile web app’s concept.

If you’d like to develop a website app or migrate an existing one to Node.js or inquire about our Node.js web application development services, get in touch with our consultants. Our team will reach out to you for a head-to-head project consultation. All the best.