We are JavaScript lovers with a zeal to engross ourselves in full-stack technologies and pass the same to our customers in the form of well-crafted posts, news and updates.
Home > AngularJS > Why you should upgrade AngularJS to Angular? 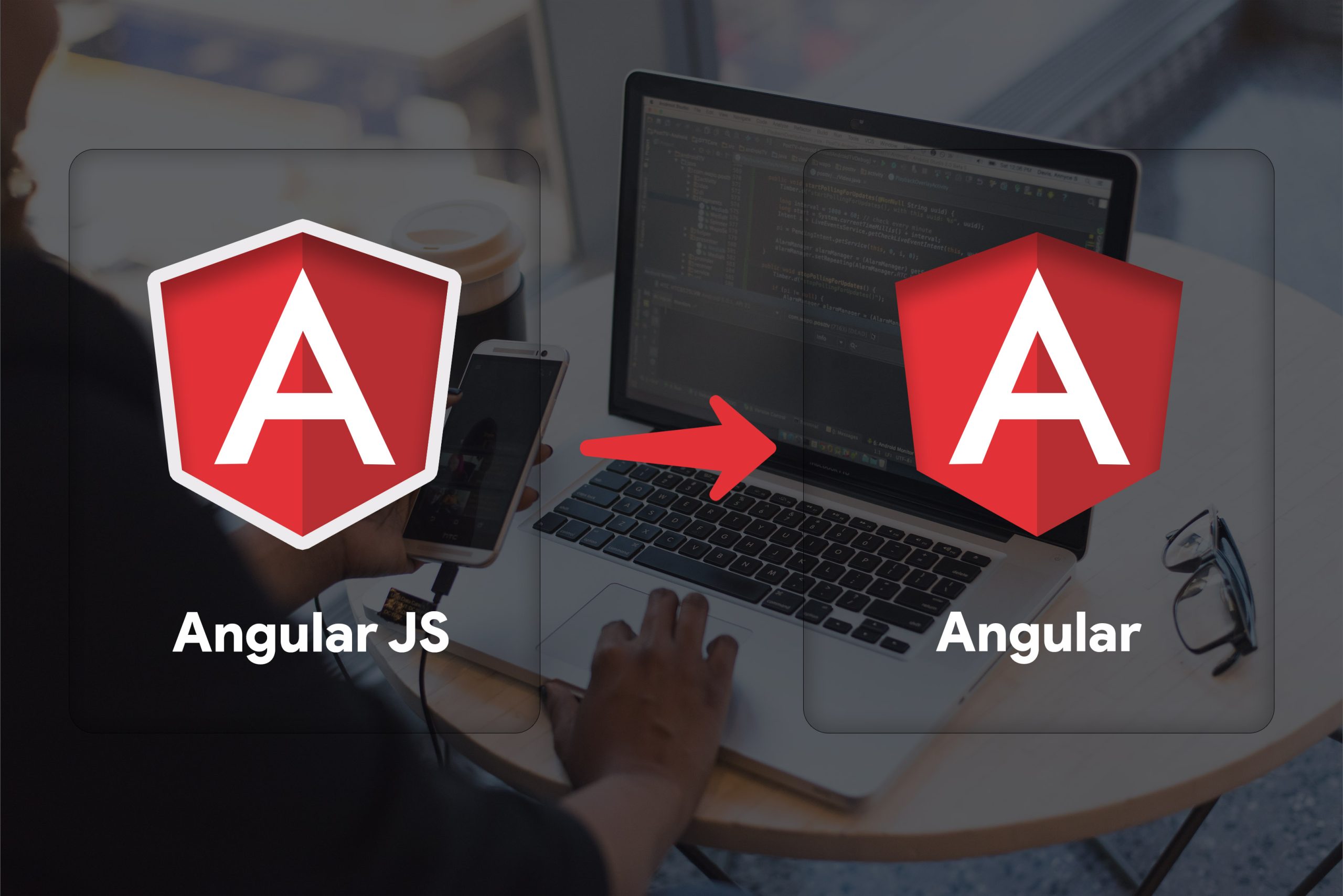 If you are considering subscribing to Angular development services of a full-stack JavaScript agency, this article is for you.

We are going to talk about whether you should upgrade AngularJS to Angular for your web applications.

Well, the answer is YES! And now is the time to take the leap.

AngularJS is an open-source JavaScript framework for a website’s front-end development. It was released by Google in 2010. AngularJS was primarily used to develop dynamic single-page applications.

In 2016, Angular’s creators realized some shortcomings regarding scalability and performance in the framework and moved it to version 2.0. The name also got rebranded from AngularJS to Angular.

However, the Angular framework is still being used, but it is advised to migrate to the newer Angular version for more performance and advantages.

Businesses are starting to get concerned because they will need to upgrade soon and Angular is becoming more popular. Google no longer support Angular JS, but that’s not the only reason businesses are switching to Angular.

So, why are people migrating? What benefits will the migration bring to your company? We’ll explain this in this blog post.

But first things first, what is the difference between AngularJS and Angular?

Difference between AngularJS and Angular

AngularJS is a framework that helps turn fixed HTML into dynamic HTML. This makes websites look better and easier to use. Angular is a newer, faster version of AngularJS with many advantages like a modular layout, Angular CLI (Command-line interface), and the ability to create dynamic SPAs.

As per Stack Overflow’s 2020 developer survey, over 41% of programmers reported using Angular or AngularJS in their web dev projects. Many experts agree with the benefits of migrating from AngularJS to Angular. But, due to the complexity of the switch, they hesitate. Although, many new features are added in each version of Angular. This makes upgrading the right decision for most organizations.

Reasons to migrate from AngularJS to Angular

AngularJS has been improved in several aspects. These reasons below explain what makes Angular migration a considerable decision for your organization:-

The MVC architecture breaks down features into various AngularJS app creation levels which makes the process time-consuming. Whereas Angular uses components that include features in a single class. This makes the development process more efficient. You can even notice the difference after migrating from AngularJS to Angular.

Another big difference between Angular and AngularJS is that Angular uses TypeScript while AngularJS uses JavaScript. TypeScript is a programming language that is based on Javascript. It has more features than Javascript itself and is good for front-end development. TypeScript can also handle large projects pretty well.

TypeScript helps improve productivity because it automates error detection when coding. Also, it is an object-oriented language that helps write cleaner code that can be reused more easily.

Angular’s structure is built differently than AngularJS. It is re-designed to be more efficient when developing complex enterprise-level applications. Anyways, Angular’s simplicity is retained for a smooth learning curve. Angular also ensures a clean code structure. It has features like dependency injection. This makes the entire development process quite efficient.

AngularJS is not supported by mobile browsers, which is why more developers should know how to migrate AngularJS web applications to Angular. This is a serious limitation because more people are using mobile devices than desktop computers. In addition, Google has been changing its search engine algorithm to favor websites that are designed for mobile devices.

Angular is more modern than AngularJS. It runs faster because it supports component-based architecture instead of the traditional MVC. AngularJS has a slower two-way binding algorithm. Angular’s TypeScript language supports static typing which loads only particular modules and Angular entities to prevent runtime errors when building complex applications.

AngularJS material is based on Google’s Material Design Specification. It has a lot of benefits, but it can only be used with AngularJS 1.x. In 2016, Google released a new design language called Angular Material. This material uses a responsive design, which makes it look good on different devices. It is also more extensible than the old material design. Plus, it supports versions 2.x and up.

Advantages for your business after Angular migration

There are several reasons why you might want to migrate from AngularJS to Angular. Technical reasons are one thing, but there is also a business case for it. What does your business stand to gain by making the switch? Let’s talk.

Angular is more advanced than AngularJS when it comes to architecture, code, and productivity. It ensures a cleaner code and a more productive development process. While AngularJS also has some benefits. It is good to develop small apps, but not for building large applications. Angular is better for that purpose. When thinking about how to migrate from AngularJS to Angular, the main thing to consider is its use of component-based architecture.

TypeScript is more modern than regular JavaScript. It also works better on mobile devices and browsers. Plus, its data binding algorithm is more advanced than AngularJS’s. Google probably built a new Angular version from scratch in 2016 because they knew the limitations of the first Angular. Businesses can build better applications using Angular instead of AngularJS because it makes compiling and code optimization faster, which reduces the number of runtime errors.

One reason to migrate from AngularJS to Angular is to make the code more efficient so that the development and business processes get more cost-effective. This reduces the development life cycle, enabling you to spend less money and produce better results. Angular also comes with an official Command Line Interface, which means your Angular developers no longer need to depend on many of the third-party tools that are required in AngularJS.

Every penny saved in the development process adds up to something huge in the end. Cost optimization is not just about reducing costs. It is mainly about getting good value for the money you spend. You can save money by moving from AngularJS to Angular, and you’ll get better results. So there’s no reason not to make the switch.

This is the best reason to upgrade from AngularJS to Angular. A business that plans for the future should have started or been planning to upgrade its AngularJS service to Angular. One reason AngularJS is nearing its end of support is that it has been in a long-term support period since the middle of 2018. This period was supposed to end on May 31, but the development team extended it by six months due to the impacts of COVID-19.

AngularJS hasn’t received any new features in the last three years. It’s only been getting bug fixes and security updates. As of this year, those security updates will stop. This means that any applications built on AngularJS will be vulnerable to attacks. Whereas Angular is updated regularly which makes it good to migrate your web app on it. This will future-proof your applications and business. Every business should have a plan for migrating from AngularJS to Angular.

According to Statista, 54.8% of internet searches are done from mobile devices. This percentage is increasing year by year. This has increased the significance of the responsive UI-design approach. Even search engines like Google are focusing on a mobile-first approach by ranking websites that follow it higher on the SERPs.

Good thing is that, if you have been using AngularJS in your web apps, you will not have much difficulty migrating them to Angular. Moreover, this framework improves the performance by reducing the page load time.

If you haven’t started planning your migration yet, now is the time. Our Angular team of experts is here to help make the process as smooth and painless as possible for your company.

You can hire dedicated developers for this job or simply contact us to provide you with a customized package.

We will be looking forward to your response. All the best.

Is it smart to build Angular 13 multi-tenant app?

Do you want to build an Angular 13 multi-tenant app? If so, you need to make sure that it’s smart to do so. Multi-tenant architectures are getting really popular. Their ability to separate client data rather than placing it in a single database is the main reason behind dedicated front-end developers using them so aggressively. […]

Schedule a Call with our expert and
Get free consultation

Submit your details and we will get back to you