We are JavaScript lovers with a zeal to engross ourselves in full-stack technologies and pass the same to our customers in the form of well-crafted posts, news and updates.
Home > News > Best practice for Angular security! How to secure the Angular app?

Best practice for Angular security! How to secure the Angular app? 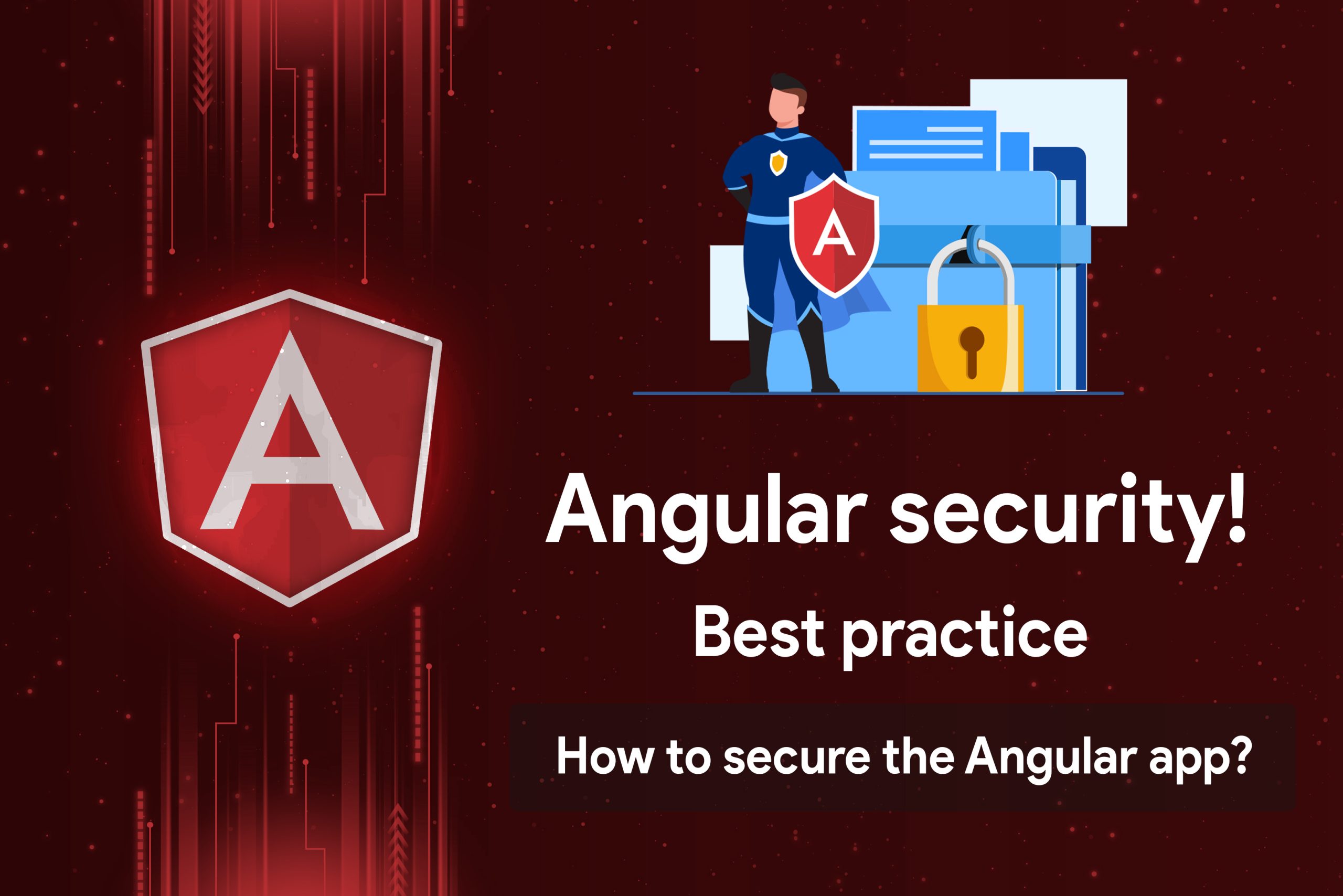 Angular is a dynamic and vastly used framework. It is getting more advanced with the release of the new Angular version 14. However, it needs to be used with best coding practices to ensure that the application built on the Angular framework is free from hacks and perfectly secure.

This article will inform entrepreneurs and CTOs about the risks of security defects and vulnerabilities in an Angular app.

We will also discuss the respective methods and activities you can perform to make your Angular app more secure.

Angular is a front-end development framework that can help you build professional websites and applications. Maintained by Google, It is an open-source, JavaScript framework.

Angular is primarily used to develop dynamic single-page applications while providing a standard structure for developers to create enterprise-level applications.

Previously, we shared 5 Reasons To Develop Your Next Web App With Angular. This time, we will tell you the 6 best practices for Angular security:-

1. The “Angular way” safeguards you from XSS.

2. Use inner HTML with caution.

4. Never use native DOM APIs to interact with HTML elements.

1) The “Angular way” safeguards you from XSS vulnerabilities

One of the best ways to protect against these security risks is to use interpolation, or {{ }}, to encode potentially dangerous characters safely and escape untrusted HTML elements or CSS expressions within a template expression.

eCommerce sellers and entrepreneurs need to be aware of the potential risks of security defects and vulnerabilities in their online stores.

Much like React and Vue.js, Angular Applications takes on a security-by-default approach. All data is treated as unsafe and untrusted by default. Thus, perform output encoding by default for any text in an HTML context.

2) Use inner HTML with caution

You must dynamically add HTML to a component, and bind its generation to [inner HTML]. This ensures that data will be HTML interpreted and sanitised, removing unsafe tags and preventing any malicious cross-site scripting code.

Kindly note that the action of sanitising is not the same as encoding.

What is the difference between sanitization and output encoding?

When talking about output encoding, strings are replaced with their text representation, mapped to a particular HTML tag. For instance, input is parsed, and Angular will encode the special angle brackets notation for many other frameworks implementing security best practices. It performs mapping and writes the following text, which the browser then interprets the context and outputs a tag.

Sanitization takes a more assertive approach to detecting hazardous characters and removing them from the text, which is later written to the DOM.

As the context directly influences how to take action correctly, it becomes the deciding factor in output encoding and sanitization.

Never concatenate any potentially user-provided input as a string to a template.

There should be very few cases where you need to use templates instead of string interpolation or component composition in an Angular application. You are encouraged to sanitize to all possible extent the provided input.

Please note: The latest versions of Angular are ahead-of-time compilation and is set to true by default, preventing template injection:

4) Never use native DOM APIs to interact with HTML elements on the page.

It is suggested to use Angular template mechanisms and Angular’s own APIs to manipulate the DOM instead. Avoid direct DOM manipulation.

Angular has APIs that allow you to directly manipulate the DOM in the same way we advise against. For example, the ElementRef API. However, using this API can introduce security risks, allowing you to access and manipulate DOM nodes directly.

Such interactions can lead to security vulnerabilities.

Enforcing template engine mechanisms in a configuration of Angular’s server-side rendered application could potentially inject malicious code into a template.

Data injected into the scope of the Angular API is external and can’t be sanitised. It poses the same risks as template string concatenation.

Some essential fundamentals guidelines to ensure a secure Angular application are as follows:

Please Note: Even if you follow Angular App security practices, other module authors may not. Thus, leaving your application exposed to severe issues.

From JS Panther, you can hire AngularJS developers. We have a team of skilled professionals who can help upgrade your Angular app, ensure its security, and more.

Connect with us. We are ready to discuss your project requirements 🙂

5 Tips to Get Your Site Ready for Black Friday 2022

Ecommerce is becoming increasingly competitive as sales continue to rise. Black Friday and Christmas, End-of-year sales were estimated to be $1.3 trillion in 2021, a 7 to 9 percent increase over 2020. To make this strategic period a success in 2022 and increase turnover but notoriety, develop loyalty and win new customers, you must stay […]